Update 11/03/21: During 2020 commemorative activities were to be held all around Australia. Although some activities were canceled or postponed in response to COVID-19,  there were are a range of online and physical exhibitions that took place, providing Australians with the opportunity to understand this story from all perspectives. You can find more information about this here on the Arts Gov website. There is also information on this website: www.endeavour250.gov.au .

What is Kiwi Woggle?

Kiwi Woggle is the oldest Scout competition camp (for 11-14 year old boys and girls) running in Queensland. The camp involves Patrols competing for a perpetual trophy, the “Kiwi Woggle” by participation in activities and camping by applying the Queensland Scouts Camping Standards and teamwork challenges.

It is an opportunity for you and your PATROL to put those Camping Standard Skills you learnt at the Den into a real challenging camping situation and have a heap of fun along the way.

Patrols will camp independently in Sub Camps under the supervision of Sub Camp Leaders.
Young or inexperienced patrols can also attend Kiwi Woggle with Leader Support to gain valuable experiences and nights under canvas.

There are so many different fun and challenging activities at Kiwi Woggle for your Patrol to enjoy.

The Kiwi Woggle trophy is named after David Thain Weir who was known as “Kiwi”. Kiwi was a former Scout who dedicated over 20 years to being a Scout Leader. The trophy is modelled on his Woggle. A Scouts Woggle is a small item that keeps a Scout’s Scarf loosely secured around his or her neck.
Almost a generation of Scouts in South East Queensland have now attended the Kiwi Woggle competition camp and “Kiwi” has personally attended many times as an honoured visitor.

Part of being a Scout is following “The Scouts Code” – good Scouting standards, friendship, good sportsmanship, teamwork, camping expertise and patrol participation. Kiwi Woggle is designed to promote the “Scout Code” as it challenges Scouts, builds character and helps prepare you for the future adult world.

How to Register your Patrol

This year we are utilising the Scouts Queensland Online Registration System. We will recommend registering online using a desktop or laptop computer instead of a tablet or your mobile phone. If you need help, please read the FAQ’s. If you still need help, please send us an email. Please send your email to: .

To aid with the costs of the Kiwi Woggle 2021 camp, we are offering sponsorship packages for community groups and businesses. If you would like to find out more about the package options, please call 0400 838 085. Side note: If you would like to make a donation to support the camp and/or the Bundaberg District Scouting Association, please feel free to also call the same phone number. All assistance is hugely appreciated by our association and all our youth. 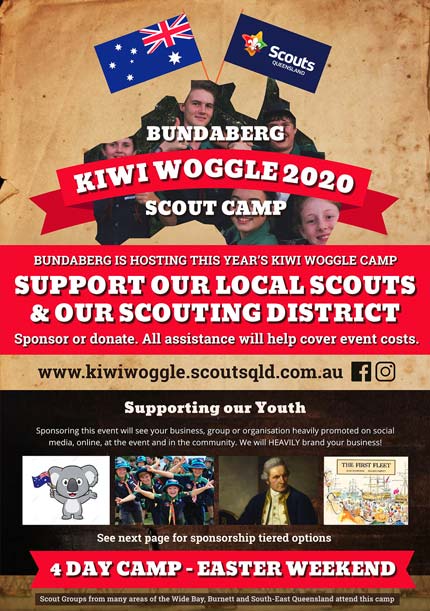 Thank you to our major sponsor Green Valley Digital for providing this website, website hosting, digital marketing, graphic design and promotion assistance leading up to the event. If you too would like to sponsor or donate, please call us on 0427 768 228.

Kiwi Woggle is a yearly competition Scout Camp for Scouts in various areas of Wide Bay, Burnett and South East Qld. It has been running for over 70 years! It started in 1946. Each year the camp has a theme. This years theme is #cook250.